Music Sales is delighted to announce that Martin Creed will be creating a new sound work for the London 2012 Festival. The Festival is the finale to the Cultural Olympiad in 2012 and will be a 12-week UK-wide celebration. Full details of the project will be announced next year. 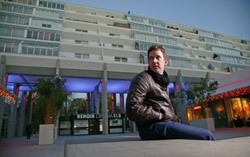 Also within the Festival will be the UK premiere of the opera Einstein on the Beach by Philip Glass and Robert Wilson, with choreography by Lucinda Childs. This will take place May 4—13, 2012 at the Barbican Centre, London.

More projects and commissions will be announced over the next year, but with projects including these composers and other artists involved such as Jude Law, Damon Albarn, Peter Sellars and Akram Khan, this Festival will the most amazing celebration of the Arts across the UK. Opening Midsummer’s Day 21 June 2012 and running until the last day of the London 2012 Paralympic Games on 9 September 2012, the Festival will provide an outstanding summer of arts and creativity in the UK.